Brothers and sisters down in Mexico and probably all over the world are sending support to the Seven Fires Council up in North Dakota.  Yesterday, my friend Yvonne participated in a ceremony on the banks of Lake Chapala in Mexico to send positive energy to the Water Protectors.  We are sharing this story because we want all Water Protectors to feel the love and support from around the world.  We want you to know that we are with you, if not in person at least in spirit.  We stand with you.

The Lake Chapala ceremony was organized on short notice.  Yvonne never would have even found out about it let alone been part of it had it not been for seemingly impossible coincidences allowing her to run into her friend unexpectedly.  And her friend, it turns out, is an artist who organized the event.

A good 50 people showed up despite the short notice.  They built a fire down by the lake at 4:00 in the afternoon.  They brought drums and offerings of fruit and incense and such.  They were happy to be partaking in some action, to be doing something, to not be powerless or helpless.

They made a big circle out of stones, flowers, and sage.  Four prayer flags were planted.  The fire, water and offerings were placed in the center of the circle.  A conch shell was blown into the four directions (my friend especially loves that).  Then everyone was purified by sage smoke as they entered the circle. 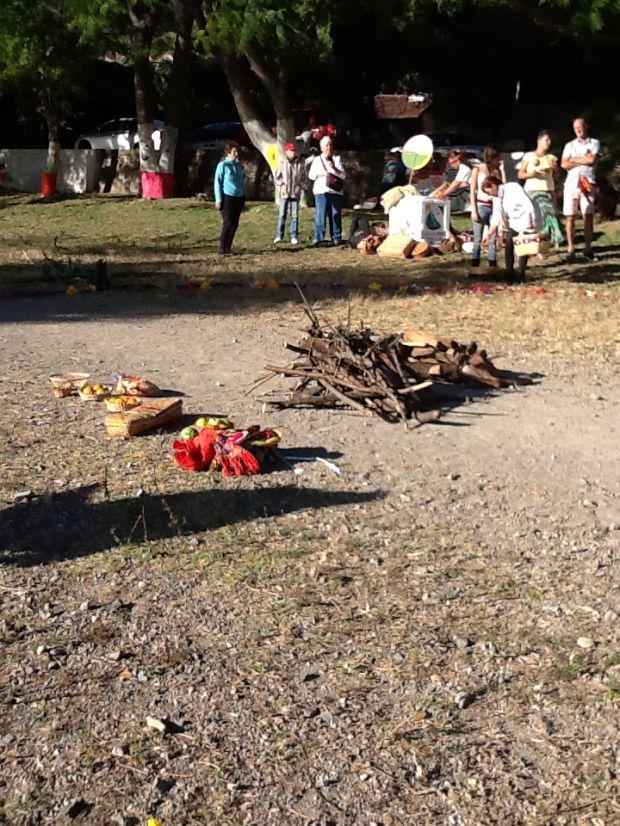 When the circle was complete the drumming began.  Each person in turn walked into the circle and offered up their prayer with drumming commencing as they returned to their place.  The beauty of the prayers was so touching that it brought tears to participants’ eyes.  When everyone was finished with their turn, then the shaman and his helper offered their final salutations and the ceremony closed.  It lasted about three hours.  The timing was perfect because a strong wind had come up bringing dark clouds and rain and everyone headed home.

A lot of times you may feel like no one is there and no one cares, especially when you are going through the hardest times.  We want you to know that we are here and we care!  I thank my friend for sharing her pictures, story, and love.  As she says, “may the people and the earth win”!

Thousands of military veterans arrived at Seven Council Fires camp to help out and today the Army’s Assistant Secretary for Civil Works announced that the Department of the Army will not approve an easement that would have allowed the proposed Dakota Access Pipeline to cross under Lake Oahe in North Dakota!

Live, on-demand writer. Tell me what you like and what you want more of, and I will write in response to the majority of my readers first. Thanks! I look forward to working with you! Love you!